Automatic stacking cranes enable the highest possible capacity and stacking density. Kalmar’s ASC application optimises throughput and stack footprint. When using Kalmar AutoShuttle™ as a feeder, apron size can also be minimised, making your terminal as space-efficient as possible. For greenfield terminals, the reduction in footprint size can result in significant capital cost savings, in terms of both land acquisition and terminal realisation. Alternatively, and for brownfield terminals, the space freed up could be used for an expansion of the stacking area that would enable you to increase operational income.

A combination of automatic stacking cranes (ASCs) and automated shuttle carriers helps you maintain high waterside productivity while ensuring the highest standards of safety and compliance with maritime transport regulations. As well as minimising the potential for human error and improving safety, automation helps you avoid unexpected interruptions that impact productivity and profitability. Kalmar ASCs and automated shuttle carriers are based on the Kalmar One automation system which provides you with proven functionalities and well-established processes for your terminal.

ASCs are typically used in larger terminals, where throughput and stacking density are important key performance indicators. However, they can also be cost-effective solution in the long term for medium-sized terminals.

Kalmar is a pioneer in stacking automation, with a number of industry firsts, including: 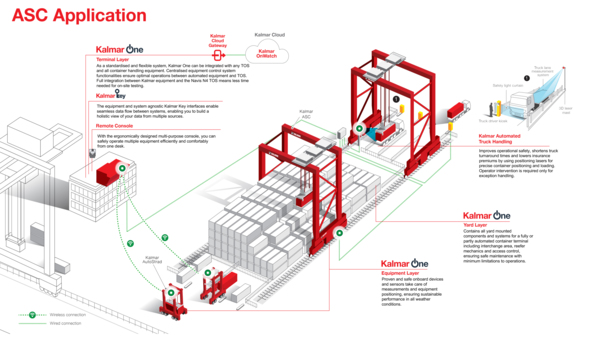